It is an important thing to make a disaster risk assessment, especially for the country that commonly hit by a disaster like Indonesia. Strengthening capacity of local government and local communities in disaster-prone areas had to be done in order to reduce the impact that caused by the disaster. Disaster risk assessment is very useful to determine the impact and the potential damage that can be caused by a disaster.

This is the first stage of a serial training about Making Disaster Risk Assessment that will be held later. The purpose of this first training is to introduce the OpenStreetMap (OSM) as a way of mapping in the area affected by the disaster and teach participants how to use OSM for mapping. At the end of the training, participants are expected to be able to know how to map using OpenStreetMap. The output of this training is the establishment of a risk assessment document that can be used for decision-making of local government when a disaster happens.

The training in Pare – Pare was held from February 14 to 17, 2017 at Hotel Parewisata, Pare – Pare, South Sulawesi. After that, the training in Jepara was held from February 21 to 24, 2017 at Lecture Hall Great Hall of Brackish Water Aquaculture (BBPBAP) Jepara. Participants are 25 people who came from various institutions, such as BPBD, Red Cross, Boy Scouts, LPBI NU, and university representatives.

The participants were given a short introduction about  OSM and how to map using Java OpenStreetMap (JOSM). Participants also learn how to collect the field data using GPS, OSM Tracker and Field Papers. Not only do the mapping in the room, the participants also conducted a field survey on the second day. The purpose of this survey is to map some of the public facilities around the training location. 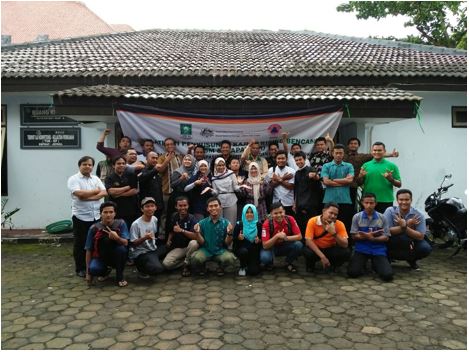 Photo session with all participants in Jepara