Commemorating International Women’s Day, the Humanitarian OpenStreetMap Team (HOT) Indonesia organized a mapping event, #WomenMap, using free and open-source mapping tools. The event was designed to introduce and teach women digital mapping and ICT skills. It was pioneered by HOT as it moves towards promoting inclusivity for vulnerable, disenfranchised groups, such as women, persons with disabilities, youth and marginalized communities by help narrowing the digital divide. The initiative is supported by the Australian Government, Disaster Management Innovation (DMI) and UN Women. 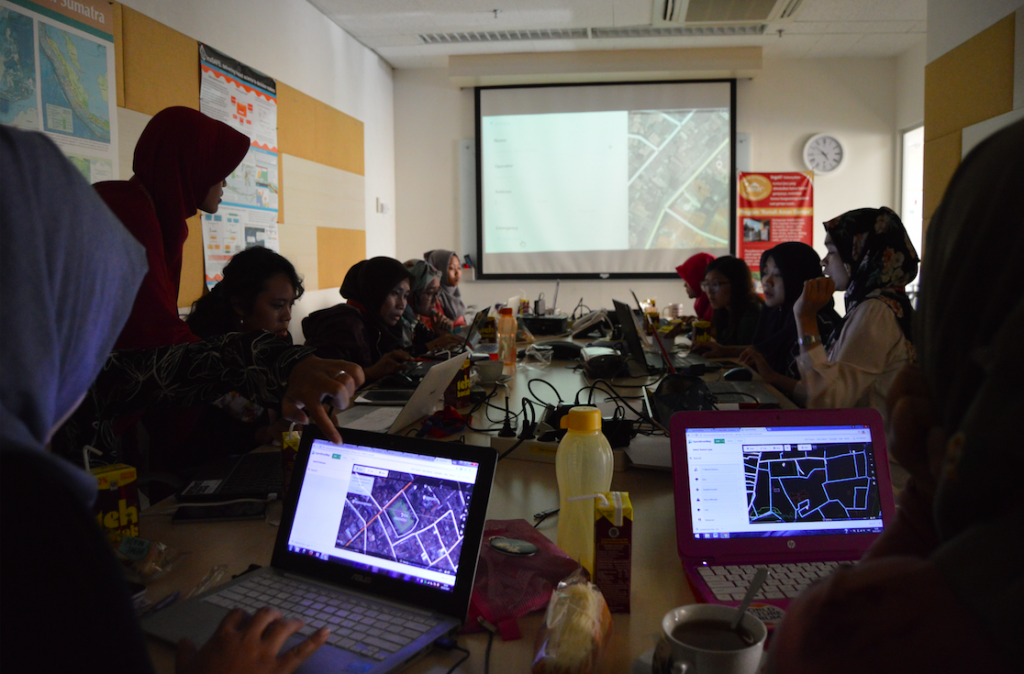 In many parts of the globe, women are still subject to violence and discriminatory practices, with 1 in every 3 having experienced either physical or sexual abuse. Every year, an average of 800 mothers die due to miscarriage. In workplaces, female employees receive an aggregate income of 30% less than their male counterparts (Constitutional Database, UN Women, 2014). This is only a snapshot of the many grim realities on how distant we are currently from achieving gender parity.

When it comes to access to public facilities, policy makers often neglect women specific needs. In fact, although the number of women political representation across the globe has doubled within the last 20 years, women still occupy only 22% of parliament and other decision-making seats. This underrepresentation often halts the progress in catering for women’s rights.

Public facilities ensuring the safety of women, such as street lights, separate sections for women passengers on public transport, and maternal and infant care clinics, are yet to be properly mapped and documented. In disaster-stricken and conflict areas, the number of violence and absence of proper access exacerbate the suffering experienced by women. This lack of representation and access make it even more critical to empower women with skills that enable them to advocate for their rights and needs.

#WomenMap allows women to intensify discourses on how open-source technology empowers females across the globe. On March 8, 2017, women representatives from the public, private sector, NGOs and universities gathered for a training in OpenStreetMap (OSM). Among institutions registered were the Ministry of Rural Development, Disadvantaged Regions and Transmigration, University of Gadjah Mada, Trisakti University, School of Government and Public Policy, USAID ICED, PT. Ruang Raya Indonesia, and Indosat.

Opening the training, Charlotte Morgan from Disaster Management Innovation (DMI) instilled the motivation behind empowering women through ITC and GIS, “Computer and GIS skills had enabled me to contribute to larger causes and to lead a breakthrough in my workplace.” Additionally, Iriantoni Almuna from UN Women stressed out, “Girls are traditionally kept at home and are not equipped with life-saving skills, it’s important to reverse this by training women skills that can leverage their position and roles to community.” 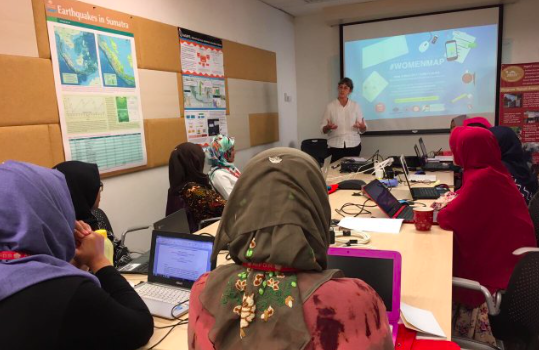 The training includes straightforward techniques to add spatial data information to OSM and how collected data can be visualized to drive innovation and advocate for women’s rights in various industries, such as healthcare, education, entrepreneurship and tourism. Consistent with the effort to mainstream gender roles in tech and spatial data field, HOT traced the number of female participants in the 100+ trainings conducted since 2014. Female participants had increased over time although peaked to around 30% of the total certified training participants. This is where the brainchild to initiate #WomenMap came in, to balance the gender ratio for women mappers.

In other parts of the world, HOT rallies support to help map women and communities affected by Female Genital Mutilation and malaria. OSM Community also establishes objects and mapping tags specific for issues that may disproportionately affect females. The #WomenMap is expected to develop into a sustainable, collaborative initiative at improving the livelihood of women across the country.