There are endless examples on how OpenStreetMap (OSM) can be used as the base map in various subjects. The OSM feature to edit the map that we are going to use gives us a chance to enrich the map in order to provide a richer story for our audience. The same can be said for the use of OSM in the Environment setting. Environmental OSM provides an introduction to the use of OSM to help tackle global warming, sustainable development and biodiversity. 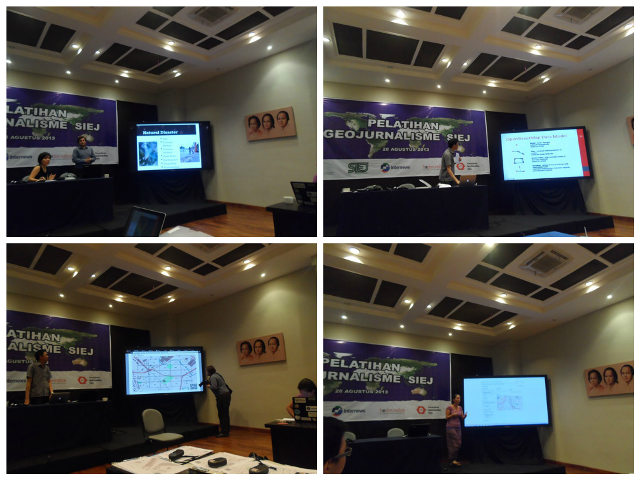 To promote the use of OSM on Environmental Journalists, on August 28th, 2013, Humanitarian OSM Team (HOT) Indonesia in cooperation with Internews, The Society of Indonesian Environmental Journalists, Freedom Institute, and Earth Journalism Network held a Geojournalism Training. There are three sessions in this training. On the first session, three speakers introduce the participants on the various aspects of GeoJournalism. William Shubert from Earth Journalism Network gives introduction to GeoJournalism, how Maps combined with Stories can result in GeoJournalism, why it matters and examples of how it was used. Next speaker, Emir Hartato from Humanitarian OpenStreetMap Team (HOT) Indonesia present how to use OSM, the benefits, case studies and how to contribute in OSM. The last speaker on the first session, Anahi Ayala Iacucci from Internews, explores the use of Ushahidi to map citizen report. She demonstrates how it can capture reports using various means of communication, start from SMS, Twitter, e-mail to smartphone application.

The second session is an outdoor exercise. Here, participants were divided into 3-4 peoples to perform data collection. Each group use smartphone, FieldPaper and GPS unit to collect the Environmental PoI and building data in the area surrounding the training site. Despite the hot weather, the participants are actively collecting the data from the field. 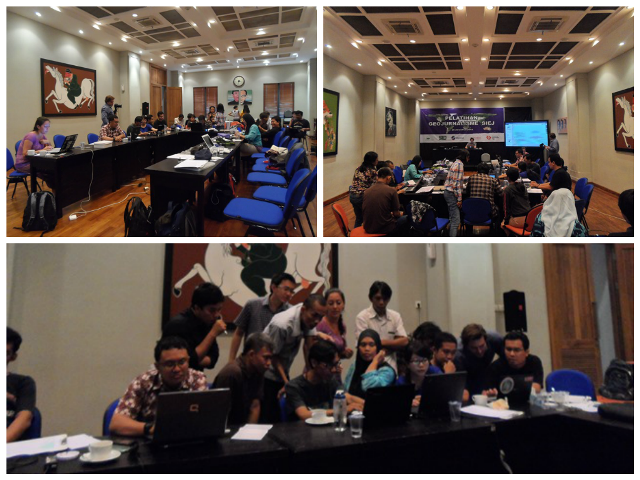 Participants were excited to learn OSM and Ushahidi

On the third session, all the acquired data from the second session were imported into OSM and Ushahidi platform. The use of Field Papers ease the process to input building and PoI data into OSM, while SMS, Tweets, and report from smartphone apps were directly accessible from Ushahidi administrator dashboard. The GPS track from GPS units also can be displayed directly to OSM after it was converted using GPS Babel application.

The PoI and reports generated from the training can be accessed online on geojkt.crowdmap.com.